In the Belly of the Beast – Part Deux

What do you call someone who hits himself in the head with a hammer and then decides that it was so much fun, he does it again?  Perhaps the answer is “deciminyan.”

After attending a Christie Town Hall 2½ weeks ago in Moorestown, I received an e-mail from the governor’s PR people letting me know that he would be doing an encore performance in Gloucester County today.  So I went, and wasn’t disappointed – at least by the crowd.  The small auditorium at the Washington Twp Town Hall was filled with the glitterati of the right wing – Christie acolytes and adorers from the NRA, birthers, 9-12ers, and the various strains of the Tea Party.  This time, however, I had some moral support, as my friend Jeff, who runs the anti-Christie Facebook page, was there with me. There may have been a few more closet progressives, and the teachers demonstrated outside, but for the most part it was like being at a Michele Bachmann family reunion.  The woman in front of me got visibly upset every time I turned off my camcorder, as if I were censoring the word of God.

More, including video clips, after the fold…

On the stage were about two dozen chairs behind the governor, filled with the faithful and local politicians.  There was a big sign with the number of days left before he wants the legislature to ramrod his so-called “tool kit” through the legislative process.  His dozen or so staff, with a modicum of diversity, flittered around the room until The Man arrived.  Christie gave the same schtick that he did at the Moorestown event, and I imagine there’s not much variation as he does these events across the state when he’s not on the GOP campaign fundraising circuit.  Some stories were new, but most of his ire was similarly directed as it was  in the previous event that I attended.  His soliloquy started out by bashing his favorite targets: the teachers’ union, public employees, and the legislature. 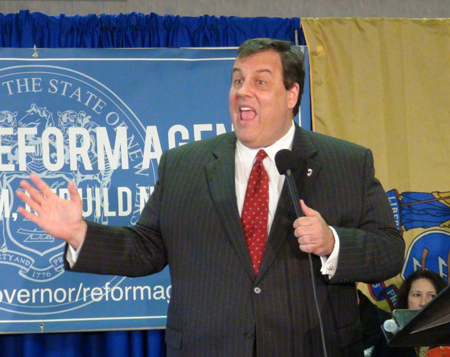 Following his remarks, he removed his jacket and took questions from the audience.  To his credit, the questions were not pre-screened, but they didn’t have to be.  All of the questioners were friendly and adoring of the Governor.

One minor piece of new news is that the Governor announced that he directed all county school superintendents to freeze local superintendents’ contracts until a pay cap comes into effect in February.  This came after he lambasted Parsippany superintendent Lee Seitz for renegotiating his contract prior to the start date of the salary caps.

One questioner, self-identified as an NRA member, asked the governor about the adoption of a concealed carry law in New Jersey.  Never one to fail to exploit a political moment, the governor kicked that can to the legislature, and urged the NRA to support Republicans in next year’s elections.  Never once did the governor take a stance on the issue itself.

Other than that, not much new.  After a couple of dozen of these events, the Governor has his routine down pat.

These town halls provide an interesting perspective on American politics, especially the uncompromising attitude of the GOP at the state and federal levels.  Will I attend more?  Only if Rosi sends me one of those newfangled Chris Christie tee shirts to wear.  (Actually, Rosi, I’d rather have a Blue Jersey one (XL) – hint, hint).