The Police State: Will Gov. Christie take on Jersey cops?

With state and local budgets in crisis and a new governor in office vowing to slash labor costs, public employees are undoubtedly worried about their salaries and benefits, if not their job security. Just days into his term, Governor Chris Christie’s transition team released a report suggesting that public employee wage freezes would apply to teachers. Last week, the State Senate passed a package of bills that would limit pensions for new government hires and require that public employees pay at least 1.5% of their salary for health insurance premiums.

However, there is one group that looks like it will come through the crisis mostly unscathed: local police officers. Going after police officer compensation is not a politically popular move, and elected officials in both parties, especially at the state level, go to great lengths to avoid angering police unions. Even Governor Christie, who eagerly picks fights with the NJEA and generally terrorizes public employees, refuses to criticize the compensation of police officers in New Jersey. The first three items on his campaign’s “fact vs. fiction” page talk about how he will protect police and firefighter pensions, how Jon Corzine won’t, and how Christie will oppose any shift from defined benefit to defined contribution in police and firefighter pensions. The new governor has shown relatively little interest in reforming the binding arbitration system that League of Municipalities chairman William Dressell calls “the primary reason for the continual increase of the cost of government”. 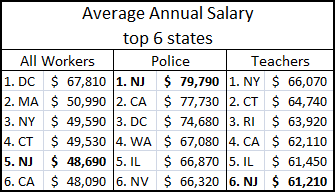 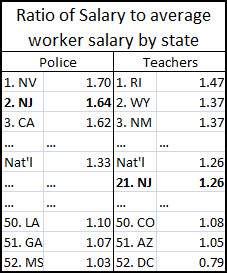 Most towns are hesitant to bear the legal costs associated with arbitration when they face such a high risk of losing. Furthermore, small towns are ill-equipped to take on police unions who have much more experience in arbitration than they do. Municipalities often offer their local police officers generous annual pay increases in order to avoid binding arbitration. Frustration with the process has led local and county elected officials like Essex County Executive Joe DiVincenzo to call for abolishing the system altogether.

For all the budget cutting measures he has demanded or enacted in his first month in office, Christie waited until last Wednesday to call for reform to the binding arbitration system. He has made no specific reform proposals. Shortly after his election, Christie told mayors in Ocean County who begged him to address binding arbitration that he was “willing to listen, but I can’t see eliminating [it],” before conceding that the state might need to “revisit what the exact rules are.” James Ahearn of The Record slammed Christie for backing away from arbitration reform, but Christie was never really behind it to begin with; during one of the gubernatorial debates, he insisted that he opposed significant changes to binding arbitration.

Christie likes to talk about his intention to “govern like a one-termer” who is willing to take on powerful public-sector unions. He will continue to not only demand for cuts in pay and benefits to teachers and other public employees, but demonize their unions as well. But don’t expect him to do anything more than voice general support for arbitration reform. Christie is afraid to do anything that might hurt his reputation as a “law and order” governor, and he’s not terribly eager to annoy the police unions, either.